Today, after lunch, we met the Thompsons at the National Zoo. We met the Thompsons near the red panda habitat, and we immediately went into the panda house, where the pandas go when it is too cold for them to go outside, which it was today. We had fun watching the pandas, but I must say that I thought that the red pandas where cuter, but that might just be because one of the pandas that we were watching started grotesquely grooming himself. After the pandas, we walked around more of the Asia sector of the zoo, then we went to the African sector. many of the animals in the African sector were not out, but some of the highlights were the Zebra, which is Rose’s favorite, and the cheetah. After that, we checked out some other animals, then we went into a few building including the reptile house, the Komodo Dragon house, and a house that had gorillas, which was the highlight of most of our trip, because they had a 5 day old baby that had just come into the public earlier that day. It made me realize how similar we are to the gorillas. After that, we walked around some more, then we departed when the Thompsons went into the gift shop, and we walked back to the car. I am exited to see the Thompsons again when we return to Iowa in 44 days. 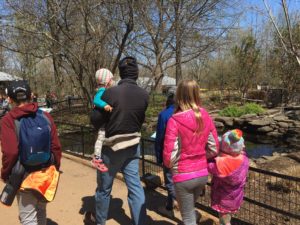 3 thoughts on “The National Zoo”