Once apon a time, in a galaxy far far away there was a place called Kentucky. In this place there were seven people. Those people went by the names of Susan, Rob, Andrew, Mari, Elliot, Lucia, and Rose. They were all living in an RV in a place called Big South Fork State Park. Why anyone would ever want to live in a 240 square feet house I do not know but after studying this unique specimen I have come to realize that these so called humans often make uncalled for decisions. Now Susan, and Rob were what these people might call parents. Parents are like the head decision makers for a for a group (or more scientifically a family) of human. One day (I think they called it Thursday but i’m not even going to try to understand what that means) the decision makers decided to take there family on a “hike”(which is basically walking on a unpaved sidewalk). They were going to a place called Natural Arch. From my satellite imagery I believe that it is a rock formation shaped like a bridge. When the family arrived they unloaded out of their emergency evacuation vehicle (EEV) (which they use quite often.) They started their hike and after a short amount of time they made it to the arch. At the arch they climbed on the rocks,then they took some pictures. 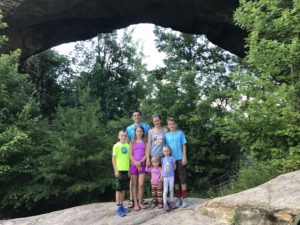 Then they kept hiking,they hiked around the arch and found a turtle on the way.

The next day Mari was sick. Susan decided to take part of  the family to a museum. The museum was all about a mining company that owned a large portion of Kentucky.

The next day(Saturday I think)The family went on the Stearn Scenic Railroad. There were some beautiful views from the camera I installed in Andrew’s eye until he got stung by a wasp!!! Through the commotion I think I saw the wasp go into one of the holes in his pants. He thought he killed it but at end of the train ride he pulled up his pant leg and it was sitting on his sock. then it flew out the window.

That afternoon while Susan was napping Rob took all the little family members on a hike. First they parked the EEV at a pulloff and walked down the road for 1 mile or so then they found a nice place to walk down the mountain to what Rob thought was a small creek when he saw it from the train.It was hard to walk down because it wasn’t even a hiking trail.When they got to the bottom by the creek they realized that it was not the cute creek they saw from the train but there was a place they could cross. It turned out to be harder than they thought to cross because Rob was carrying Rose and Lucia needed alot of help. Luckily they made it across without anyone falling in. After they made it across the decided to go up the bank and walk by the train tracks to an old mining town and walked down a road to the gates which were closed. they had to climb over them and they walked down the road back to the car and went back to their RV.

The next day(Sunday if that means anything to you)The family packed their trailer and drove to Pigeon Forge, Tennessee, right by Gatlinburg, and the Great Smoky Mountains. When they got to the campground they got settled in, then the kids went to the pool. The next day Rob worked all day and the kids played at the pool and did other various activities. That evening they went into the National Park and went for a short hike to a waterfall. Now I must go to the satellite viewing room and update some software.